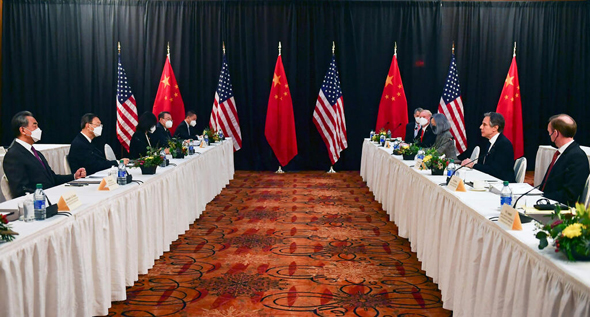 U.S. and Chinese officials met tonight (Thursday-Friday) in the city of Anchorage, in the state of Alaska in the United States, in a meeting that became tense from the very beginning. This is the first time the representatives of the two countries are meeting in the era of the Biden administration, as part of a round of meetings that will last two days.

Already in the opening remarks both sides exchanged sarcastic remarks, which led to an unexpected postponement in the schedule of the talks, with each side responding to the other side’s remarks. Just a day before the meeting, US Secretary of State Anthony Blinkan announced new sanctions to be imposed on China in the wake of Beijing’s democracy support for Hong Kong.

The Chinese representatives at the summit Photo: Reuters

Blinken said in his opening remarks that “China’s steps threaten world stability.” He said, “The United States is deeply concerned about China’s actions against the Uyghur-Muslim minority in the Xinjiang region, as well as its actions in Hong Kong and Taiwan, its cyber attacks and its economic coercion on our allies.” Became very quickly tense.

“The United States intends to defend a ‘rules-based order’, without which the world would be much more violent,” Linken continued. “We feel obligated to raise these issues here today.” According to Blinken, the United States is not interested in an open conflict with China, but “in favor of competition.”

The Chinese, for their part, did not remain indebted. “African Americans are being massacred across the United States, human rights there are at a low point,” said senior Chinese diplomat Yang Jichi, who is in charge of foreign policy at the Chinese Communist Party.

“The United States needs to deal with its own affairs. China is strongly opposed to interfering in its internal affairs.” Young questioned American democracy. “While, according to opinion polls, China’s leaders are widely supported by the Chinese people. The United States does not represent the world, it only represents the United States government.”

The Chinese accused the American representatives of speaking in a “condescending” tone, while the Americans claimed that the members of the delegation from Beijing were “focused on impressing the audience.” “It seems that the Chinese came to the meeting to attend a dramatic show, and not to talk about the essence,” a senior U.S. administration official said. “They made it clear when they immediately violated the protocol.”

Both sides agreed on short two-minute opening statements, but while Blinken and National Security Adviser Jake Sullivan’s opening remarks were close to this allotment, Chinese representatives spoke for more than 20 minutes. The parties were not even able to agree on the time when the journalists would leave the room.

“Our delegation came to a meeting committed to laying out the principles, interests and values ​​of the United States regarding the engagement with Beijing,” the same senior administration official said. “We still have a lot to achieve at the meeting. We will use the remaining hours to privately outline to the Chinese delegation the same messages we have consistently conveyed in public. ”

The Biden administration has not yet indicated whether it intends to back down from the tough stances taken by former President Donald Trump towards China. Trump has long boasted of his strong relationship with Chinese leader Xi Jinping, but that relationship fell apart after the corona plague spread from Wuhan city around the world in general and to the U.S. in particular, a plague that Trump used to call the “Chinese virus.”