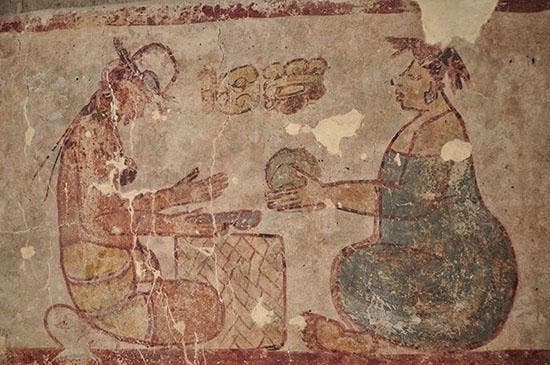 At the ancient Maya site in Calakmul in the Yucatan peninsula of Mexico, archaeologists have discovered a remarkable 2,500-year-old mural showing a salt exchange between a seller and a buyer. This is the earliest record of salt as a product.

Salt has always been an important resource throughout the ancient world. As far back as 6050 BC, salt has played a key role for countless civilizations from China to Egypt. It was money at various times and places, and has been the cause of bitter warfare.

In addition to its very practical role, salt has also played an important role in religious rituals in many cultures, symbolizing purity. It is one of the most effective and widely used food preservatives, which is why salt – also known as “white gold” – has become an important economic source.

Although we now see salt as a cheap food ingredient, its rich history still touches our daily lives in more ways than we realize. The word “salary”, for example, comes from the word “sal”, the Latin word for salt. That is because in ancient times, salt was so valuable that soldiers in the Roman army were sometimes paid with salt instead of hard cash. This monthly allowance has been dubbed a “salarium”.

It is not surprising to hear that salt played an important role among the ancient Maya as well. Archaeologists with Heather McKillop of Louisiana State University recently recorded old walls from Calakmul in which a salt vendor is shown handing out a salt cake wrapped in leaves to another person. The latter holds a large spoon over a basket.

Since 2004, Mckillop has uncovered a wealth of archaeological evidence related to ancient Mayan salt trade networks. These include the remains of ‘salt kitchens’ – buildings made of pole and thatch that have been submerged and preserved in the saltwater basins of the mangrove forests in Belize.

The Maya used these spots to extract salt by boiling brine in pots over fires. To date, the researchers have mapped 70 sites containing an extensive network of rooms and buildings known as the Paynes Creek Salt Works.

This must have been an industry-level work, as archaeologists have identified 4,042 architectural underwater wooden posts, a coracle, an oar, a high-quality jadeite tool, stone tools used for salt and meat. salted, and hundreds of pieces of clay.

Along with this recently described wall, this evidence reveals that salt cakes were carried in canoes on the coast and up rivers in southern Belize, the researchers wrote in the Journal of Anthropological Archeology.

“I think the ancient Maya who worked here were produce merchants and would take the salt with a canoe up the river. They were making a lot of salt, a lot more than they needed for their immediate families. This was their livelihood, ”McKillop said in a statement.

Two McKillop students even reproduced some ancient Mayan pottery using a 3d printer based on Belize-built scans of some of the hundreds of fragments of clay studied at the site. This confirmed that the ceramic jars in which the Maya boiled the brine were normalized in volume.

“Represented as homogeneous units, salt may have been used as money in exchanges,” McKillop said.