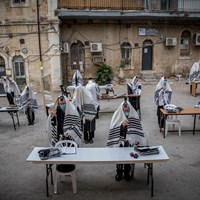 Benefits for vaccinators in Chassidut: Although the Rebbe of Carlin Stolin recovered from the corona anyone who wants to come to the Rebbe or rejoice with the Rebbe must bring either a recovery certificate or a vaccination certificate after a second vaccination | The unequivocal instruction published: The ‘healthy’ who have not yet received the second dose Will come

In the courtyard of the Carlin Stolin Chassidut, last night (Holy Saturday evening), Chassidim throughout the country were informed that anyone who wants to attend prayers and celebrations in the Chassidut courtyard in Givat Zeev with the Rebbe must bring a certificate of recovery from Korona or a vaccinated certificate.

In a message written on the blank of the Rebbe’s beit midrash in the Peri Ha’aretz neighborhood of Givat Ze’ev, it was stated on behalf of the Gabayim: Everyone must be equipped and bring with them a recovery certificate / a vaccinated certificate. “

In addition, it is also written for those who are healthy and have not been ill “‘healthy’ who have not yet had a full week from the second vaccine, they must continue to be preserved, and for the time being not reach the sanctuary at all.”

As is well known, the Carlin Chassidut is the first chassidut to be preserved from the corona and closed all synagogues even at the beginning of the outbreak of the virus in the country, and to this day the Rebbe calls on his chassidim to be preserved.

In the last month of Tishrei, after the recovery, the Rebbe of Carlin Stolin gave a recorded conversation to his followers in which he called for continuing to follow the guidelines of the Ministry of Health and attacked the contemptuous: “I am surprised that the ultra-Orthodox public has such contempt for the lives of others. For God’s sake, nothing should be facilitated, in any way and it is not a child’s play, it is a danger to lives and the principle of law. “

In his words he said: “Thank God I was privileged to get through the virus in peace. Of course it is difficult to be saved and keep it but it is God’s will and one should rejoice with the right we have to save human life.”

Last night, Rebbe Moiznitz sharply attacked the leaders of the resistance to vaccines at the end of the third meal at the end of the Torah. In the Haredi rooms, it was reported that the Rebbe said: “People are not responsible, they think they know better than doctors.”

In his remarks, the Rebbe mentioned the polio disease that broke out seventy years ago and said: “People still suffer from it.”