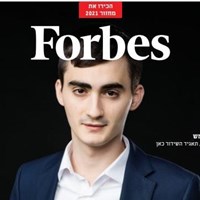 While he is all busy with the elections that will take place tomorrow, with the revelations and the political intrigue hours to open the polls, the political correspondent of ‘Here 11’ wins another title: one of the 30 most promising young people in Israel

Forbes Israel published today (Monday) as every year the list of the 30 most promising young people in Israel, under the age of thirty. In one of the prestigious places, the ultra-Orthodox political reporter of here 11 ‘Michael Shemesh managed to infiltrate.

The explanation for choosing Shemesh was a brief overview of the past of the promising political correspondent “Shemesh grew up in Bnei Brak in an ultra-Orthodox family: his father is a kollel head and his mother is a famous lecturer in the sector. And at the age of 17.5 he enlisted in the GLC. At the military station he served as a correspondent for Jerusalem affairs and a Knesset correspondent. Immediately after the liberation, he joined the broadcasting corporation that was then in its early days. Since then, he has served as a political correspondent, on radio and television. “

Michael added and explained the motive and drive for success: “I wanted to break through the wall, to integrate into Israeli society. I was very bothered by the lack of representation of the ultra-Orthodox in the media in general and the GLC in particular. It’s something that cried out to heaven. I took a risk when I went there. I was a young man from an ultra-Orthodox family, and I went against the place I came from, against the current. I said goodbye to the workplace I was in, to life and the environment. In the end, I think it was worth it. My service has opened a door for other ultra-Orthodox youths who have joined the media. “

Shemesh was also quoted as saying: “If there is a journalistic story that makes your sector bad. Will you have a dilemma?” But beyond that, I think there are obviously dilemmas, even in my field. But I believe that even in the sector they know how to evaluate professional work, and evaluate attachments to the truth. Some people understand very well that you do the work from a professional place. “

Shemesh is not the first ultra-Orthodox to make the list, in 2018 the network’s anchor Elimelech (Melech) Zilberschlag also at the time part of the public corporation appeared on the list of 30 young influencers.