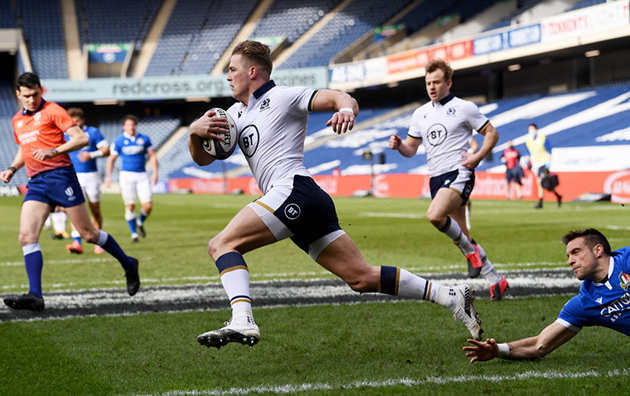 Watch the efforts in the first half from BT Murrayfield

Scotland scored a bonus point in 28 minutes against Italy

It took just 28 minutes for Scotland to make four attempts and defend the bonus point against Italy – faster than any other country ruled in the Six Nations 2021.

Both France and England scored their fourth attempt against the Azzurri after 49 minutes while Ireland took 42 minutes. When Ken Owens knocked down for his second and fourth weekend in Wales, the clock was 29 minutes.

Scotland took a moment off with Huw Jones crossing the line for BT Murrayfield’s fourth try in the 28th minute.

It was Italy, however, who got the first try of the game. Paolo Gabisi gave the visitors the perfect position to attack from five meters out after kicking a penalty kick and from the maul skipper who followed Luca Bigi broke to score in the corner after just six minutes.

Another player David Cherry followed Bigi’s lead four minutes later when Scotland put their driving ball into action near the Italian line. This is the first time in the Six Nations that the two starters have tried in the same game.

Scottish supporters then got into the action. Huw Jones from his own 22 broke the Italian half, then the ball was recycled, spread wide and Duhan van der Merwe broke down the shield to get over the try line.

Federico Mori was then shown a yellow card for a late accusation on Sam Johnson halfway through the half and Scotland got two tries while in that bin.

The first Sean Maitland and Jones came together in Italian 22 to replace Darcy Graham.

Jones then scored for himself after another van der Merwe run and a fine pass from Stuart Hogg.

It took Scotland 18 minutes in the first half to make four attempts and secure the bonus point, and you would expect them to extend their lead 24-10 in the second period.

Can’t you get to the shops? Download the digital edition of Rugby World directly to your table. Subscribe to the print edition for magazine delivery to your doorstep.