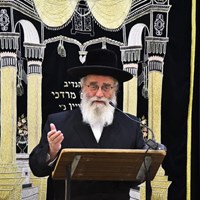 In contrast to his nephew, Rabbi Zichron Meir, who cast doubt on vaccines, the son of the late Baal Shevet Halevi speaks out strongly against the opponents of the vaccines, “the opponents and their metastases,” and states: “It is a mitzvah and an absolute duty for everyone to hear Torah knowledge.”

Against the background of the struggle against vaccine opponents, who act by disseminating false information aimed at sowing panic and sabotaging the vaccination campaign, a particularly significant ruling is published by Gaon Ben Zion Yaakov Halevi and Azner – Av Beit Din of Shevet Halevi in ​​Beit Shemesh and son of Rabbi Shmuel Halevi Wazner Zatzokal.

The halakhic ruling becomes even more valid due to the fact that Rabbi Halevi and Azner, until recently, refrained from supporting the vaccination campaign, but now specifies in a reasoned halakhic ruling the reason why he changed his mind and even sharply attacks the disseminators of false information about the vaccines.

“It is doubtful whether to take the corona vaccine injections, here begins our advice to avoid because then the vaccines were still confidential and inexperienced, and according to the Torah – the rule that any disease and medicine that is not seen and did not stand the test, will not be touched by a doctor.” Were discovered and apparently given heaven permission for their cures, until most of the world doctors recommend taking them and millions of people who took it have been rescued, as well as the God-fearing well-wishers, rescue members, testify that the vaccine results are wonderful.

“In addition to that, a great deed, after all, the deeds of the great majority and leaders of Israel Shlita who were vaccinated, and no more but yes teachers to others. From now on, it is our absolute duty to go our separate ways. Both on behalf of ‘and you were very much saved for your souls’ and on behalf of ‘and you did according to the thing which will be saved’

“And the opponents and their metastases are not enough to be judged as the people of the land, but as bloodshed and according to verse in the name of the Jerusalemite and Maimonides that every person must put himself in even doubt in danger to save others, especially not to do and publish the opposite.

“Finally, ‘asked your father, and your elders will say,’ They will tell you, ‘It is a mitzvah and an absolute duty for everyone to listen to Torah knowledge and get vaccinated, and all the more so to stay away from providing the disease and infection to his relatives and others.”

Rabbi Ben Zion Halevi Halevi and Azner sign his letter with a prayer that “Defects in us prevented an epidemic from your inheritance, and the boat sickness from among you, and we will all have a good and long life, complete redemption soon Amen be it. The writer and seal wish and look forward to the grace and mercy of Gd, Ben Zion Rabbi the genius of the Halevi tribe.

It should be noted that his nephew Rabbi Yosef Binyamin Halevi Wazner, who was appointed about two weeks ago at the funeral of his father, the late Mishkatat Halevi, to Gavd Zichron Meir and Rosh Yeshivat Chachmei Lublin, cast doubt on vaccines and even distributed an entire pamphlet on the matter.