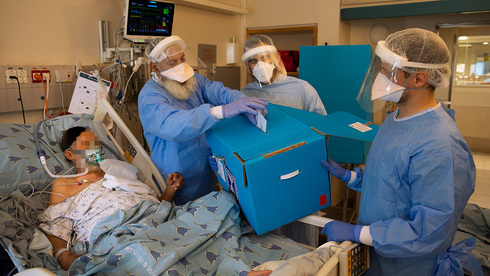 In the run-up to Election Day today (Tuesday) and in the shadow of the Corona crisis, the Electoral Commission was forced to find extraordinary solutions to allow all citizens to vote. As of this morning, with the opening of the polls, the 764 hospitalized in the corona wards have begun to exercise their democratic right. Also, until 13:00, about 40 passengers who landed in Israel voted at Ben Gurion Airport. Tonight from 19:00, the main election broadcast from the Ynet studio and from the centers around the country with all the updates; From 22:00 – the samples, responses and interpretations; Further into the night and tomorrow morning – transmitting the results of the truth

As of 1:00 p.m., 880 of the more than 6,000 patients eligible to vote exercised their right and went to the designated polls. The polling stations close at 19:00 and transportation to the polls will only be possible until 16:00. The number of insulators who voted at the designated polling stations is also low. 670 voted through the committee commute. This number does not include the insulators who arrived in the car.

Jalal Masrawa, 45, an appellant who voted at the polls at Hillel Yaffe Hospital, said: “Congratulations that the polls reached us. The staff members came into the room and asked me if I wanted to vote, I answered in the affirmative. I showed my ID card and voted. “They will vote and every vote is important. If a particular party lacks votes – it can certainly have an effect. Some people have been reached by the ballot box. There is a good team here that has taken care of that.”

The members of the polling station committee have been placed in the ward ward and are watching the voting process on closed-circuit television. Polling stations have also been set up in mental health hospitals with more than 50 hospital beds and all patients will be allowed to vote, including those in closed wards.

It should be noted that the hospitals were prepared for the operation of Election Day on a much larger scale – however in recent weeks many Corona wards have been closed, so that in practice the number of polling stations and voters has been significantly reduced. “I am very happy that this important democratic duty can also be fulfilled for patients hospitalized here,” said Dr. Tatiana Mikhalov, director of the Corona Department at Hillel Yaffe.

In addition, hospitals can vote for both inpatients in other wards and hospital staff – if and when they cannot vote near their place of residence due to their work. “The voting process is working well,” says Shavei Shmelo, vice president of human resources at Ichilov Hospital. “We opened four positions in total at the hospital and one position in intensive care for Corona patients. Within the Corona Department, three people have so far voted. Unfortunately, some patients are unable to vote. “Usually, about 1,100 people are hospitalized and work in Ichilov every election day, and meanwhile the voting rates here in Ichilov are good.”

For example, those who are in isolation cannot get to the special polling stations by public transport – so they will have to travel by private car to the polling station, where they will vote in “Drive In”. An isolated person who is registered as such with the Ministry of Health and is unable to get to the polls independently, can book a private shuttle free of charge, in accordance with the outline formulated by the Central Election Commission with the taxi company Get.

Corona patients and isolated people who have developed symptoms are also prohibited from attending the polls independently – and must register for transportation funded by the Election Commission. The shuttle booking for the special polling stations can be made on the Bon Tor website until 16:00 only.

Elections were also held at Ben Gurion Airport, and Israelis who will land at the airport today will be able to vote at one of the polling stations set up there. For those who have returned from abroad and have not yet been vaccinated twice, a special ballot box has been set up. Meanwhile, citizens staying in Corona hotels can vote at the designated polling stations set up there.

Meanwhile, the Election Commission is concerned about particularly poor traffic at the Ben Gurion Airport and hospital and isolated polling stations: only 41 returnees voted as of 12:30 and it is expected that another 800 passengers who are due to land in Israel will vote – but it is not clear how many will.

In addition, some of the polling stations in the Negev flew as a result of winds and voting tents were re-established. The polls opened on time. Also, some employees in the election campaign did not go to the polls and the committee is trying to overcome the shortage of manpower. Another unusual event was recorded when one of the voters tried to vote on behalf of a deceased person. The Election Commission asked the public: “Go out and vote.”

At Rambam Hospital in Haifa, ballots with double envelopes and posters with a list of parties and letters, a curtain and a special box were placed this morning in the Corona ward where 14 patients are hospitalized. In addition, three more ballots were placed at patients not infected in Corona.

The polling station is operated through a control room where Muhammad Hussein – one of the polling station secretaries – and three representatives of a polling station committee from various parties sat, who watched the procedure through screens. Tamar Shochat, another ballot secretary and head of operations at Ruth Children’s Hospital at Rambam, entered the ward while she was protected.

The first to vote was Ismail Bahuti, 29, of the Mashhad local council in the north. Bhuti, who contracted corona after receiving his first vaccine, said he was careful to vote in every election. One of the voters, Allegra Israel, 80, said she was undecided whether to vote. Israel, a resident of Haifa, immigrated from Egypt at a young age. She lost her two sons: her eldest son, Moti Israel, was a policeman who was killed in February 1993 by terrorists in an operational activity while sitting in a car near Talmei Elazar.

Her second son died shortly afterwards of cancer. She came to the polls with two certificates – an ID card and a vaccinator card. She became ill with corona even though she underwent two vaccinations.

At the Hillel Yaffe Medical Center in Hadera, polling stations were set up to allow patients to vote, including in the wards designated for Corona patients. The first voter in the Department of Infectious Diseases A was Yuri Takchenko from Hadera, 73, who was hospitalized in the ward for 10 days. He was escorted by the staff to the polls. The designated polling station was fully protected, as required. After him, 45-year-old Masarwa Jalal voted against the appellant, who also had the right to exercise his democratic right despite his hospitalization.

Alex Greenman, who is in charge of the polling stations on behalf of the hospital, noted that three polling stations have been set up in Hillel Yaffe, one that serves as a mobile polling station between the two corona wards. Two more were assigned to patients and hospital staff who could not vote due to their work.