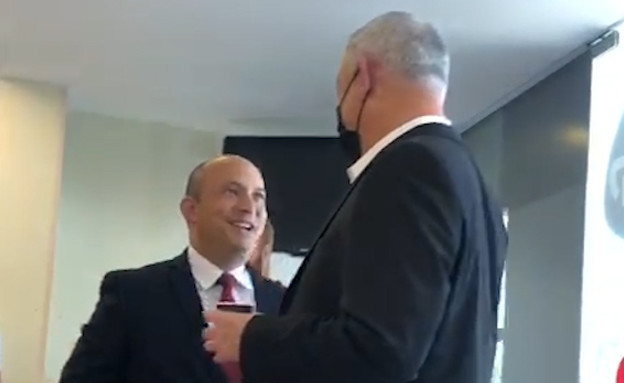 While the Prime Minister’s tent is located in front of his house, right-wing chairman Naftali Bennett arrived at Ofira and Berkowitz’s studio (tonight, 6:00 PM, Keshet 12) to take part in a special broadcast evening, attended by party leaders including Merav Michaeli, Gideon Saar And Benny Gantz.

In a conversation outside the studio, Bennett met with Deputy Prime Minister Bnei Gantz and said to him: “Do you think he (Netanyahu) will come? Has he ever come?”. Clearly he will breeze. I told him to confront him, but do you think he will come? “

“I got up in the morning and saw helicopters and things. I went out to the GSS and said, ‘Guys, what’s going on? “I was told Bibi came to tease you with a demonstration,” Bennett said in his first reference in front of the cameras to the morning events. “I said, ‘Come on, here are two armchairs – you are invited to a debate. If Bibi comes to the debate, I will grow hair on my palm. ”

As you may recall, this morning (Friday) MK Naftali Bennett was surprised to find a heavy security deployment in front of his home in Raanana. Netanyahu later addressed the issue during a Likud election rally in Raanana, saying: “We planned to run a ‘neighbor procedure’ today and try to reach agreement with Naftali Bennett on a stable right-wing government and a commitment not to sit with Lapid in government – with or without rotation. Give it up. ‘

The Shulmanim vehicle also arrived at the scene shortly after, Bennett even left his home – and according to estimates, Netanyahu will not arrive at the scene in the end. Bennett responded to Netanyahu’s request and said: “I do not sign anything for him, I work for the citizens of Israel, not for Netanyahu” and even invited the prime minister to a debate: “Netanyahu, come to the debate. Just do not regret it.”