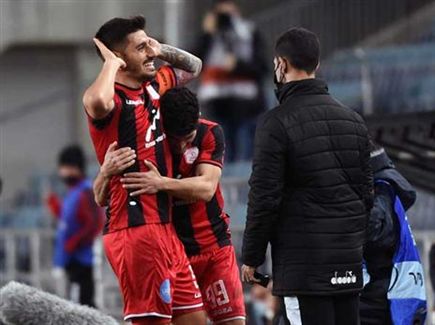 It’s starting to smell like a historic rise to the Premier League. Hapoel Jerusalem celebrated a big 1: 4 tonight (Tuesday) over the Nes Ziona section in Teddy after an excellent football display. Ziv Arieh’s trainees looked great in front of the Oranges, dominated the field and earned three precious points. Sun Age excelled with a gate and two cooks. The gap from Betar Tel Aviv / Bat Yam in third place increased to eight points.

It actually started with accelerated heartbeats for the Reds. An amazing performance by Karem Arshid gave the visitors a surprising advantage in the first half, but the leader was not excited and equalized until the end. The second half was all in red and black, with Ziv Arieh’s team simply dismantling Ness Ziona on the way to a great 1: 4.

The star of the game was Sunshine who artfully cooked up the tie and scored the turnaround goal himself, which was his 13th this season. The excellent striker then added more cooking and closed out an excellent evening. Ben Mizen was also in good form and added his own gate and cooking.

Hapoel Jerusalem, which until recently was “Hapoel Katamon”, is approaching a historic rise in the Premier League. Will the fan club, which was established in 2007 and has made it all the way from the third division, finally reach the top division after 14 years? time will tell. Currently, the Reds from the capital look like the top team in the second division. With the highest number of conquests in the league (32), the best defense (11 absorbs) and the most victories (12), it seems that the Jerusalemites are on the right track.

the progress of the game
The pace is excellent in the cool Teddy. Idan Shemesh and Omar Agbadish got into not bad situations in the first five minutes but missed. On the other hand, Ofek Ovadia raised an excellent ball in the eighth minute that Kerem Arshid had to score, but the latter missed from five meters. Aside from the excellent pace, three yellow cards were drawn in the first ten minutes of the match.

In the 15th minute, Kerem Arshid swung his left foot from 25 meters, the ball went a little over the crossbar. The hosts ‘beautiful corner kick in the 30th minute almost ended in a net, but Kaltos Numbil released a bad kick that hit the players’ stick in the box. And in the 32nd minute came the big moment of the half. Karem Arshid turned around on the spot, broke free and kicked from 25 yards diagonally with his left foot. The ball hit Adele’s distant connections. Huge goal, 0: 1 to Nes Ziona. Jerusalem tried to get back into the game, and in the 41st minute Ben Mizen hit a corner kick that went just over Ajida’s crossbar.

In the 45th minute the leader managed to come back. Idan Shemesh in fantastic action inside the extension passed Arshid, bounced over the entire defense and found the head of Omar Agbadish. 1: 1 at the end of the first half.

With the opening of the second half, Arshid tried to duplicate the goal from the first half when again from a distance, but in this case the ball went high over the goal. In the 53rd minute, Ben Mizan left an ingenious ball for an era of sunshine among all the defensive players of Ness Ziona, the great striker did not get confused against Ajida and scored his 13th goal of the season.

After a calm 20 minutes, one moment of Jerusalem pressure gave birth to a third goal. Yurai Malih and Ben Mizen prevented Dusan Matovic from running with the ball on the verge of an extension, Malih snatched the ball and left Ben Mizen who scored in front of an empty net. 1: 3 in the 73rd minute. The host did not take her foot off the pedal, and in the 80th minute it was already 1: 4. A solar era with a Walla kick on the verge of an extension, the ball hit Ben Mizen and went in. Second gate to the mazen, second cooking to the sun.

Our guys came for another season game with a lot of character to come back from behind in a huge game of everyone
There is nothing about these guys ️ pic.twitter.com/v8kXWhqvuh