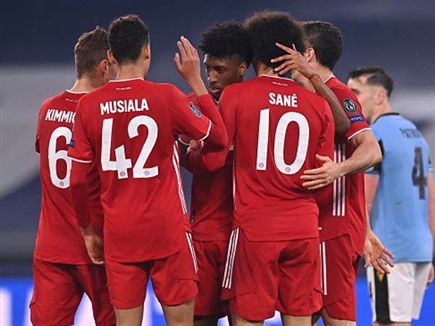 Bayern Munich does not stop. The European champion who completed winning six titles in 2020 last night (Tuesday) crushed Lazio 1: 4 in the first game of the eighth finals of the Champions League. Bayern with a monstrous away game balance at the factory – it has won 14 of the last 17 games, with three more ending in a draw.

Coach Hansi Flick He said at the end: “Everyone lived up to expectations. We achieved a victory with a high result and put pressure on the opponent. The Champions League is something special for us, we got closer to the quarterfinals and we will have to finish the job in the second game.”

Leon Gorczka Returning from injury he continued: “I’m glad I was able to be a part of such a good game, I had two tough weeks. We were aggressive against Lazio and won through the physical struggles. Thanks to them the road to goal was shorter and we planned to do it before the game.”

On Jamal Musiala who scored his first Champions League goal before the age of 18: “Joshua Kimich and I told him before the game that he just needs to play freely and we will cover for him.” Also, the young talent has to decide which team to play for – England or Germany. “It’s his decision,” Gorzka continued, “it will be accepted by him in my heart and I do not believe it will take long. I would be happy if he chooses Germany.” Leroy Sana He added: “Hanzi and the coaching staff told us in advance that if we press Lazio she will make mistakes and that has already passed in the first goal.”