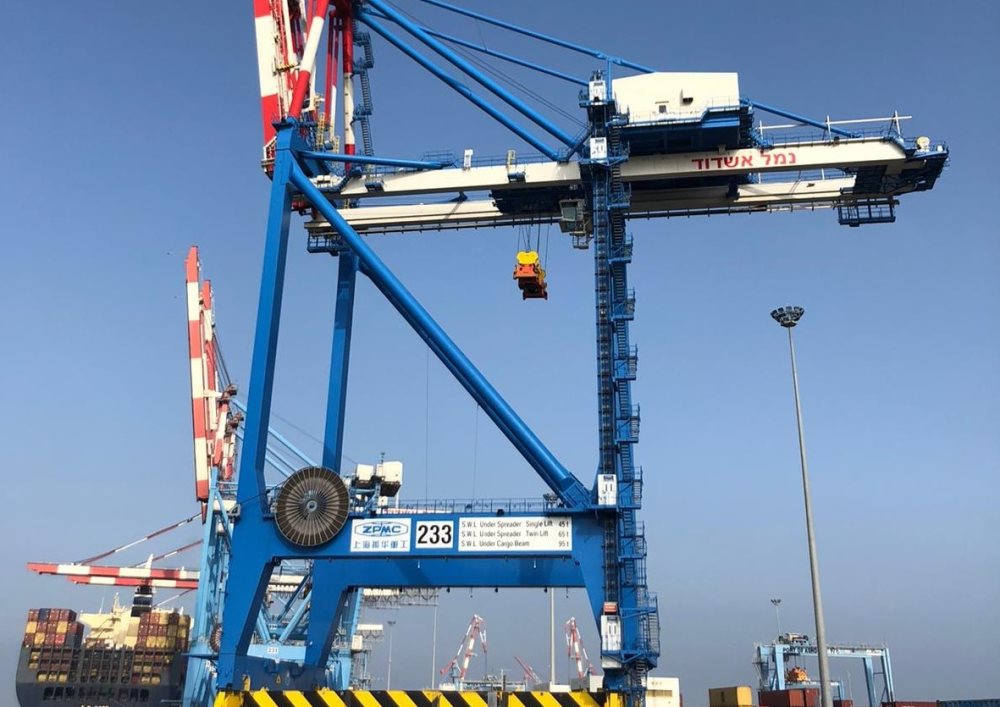 Ashdod Port Company announces the successful conclusion of intensive negotiations with ZPMC to equip itself with 5 bridge cranes, which are the most advanced in the world, through the exercise of an existing option in a contract signed in 2017.

The five new cranes will join the first crane of the ZPMC company, which was inaugurated by the Minister of Transport during her last visit to the port. The cost of purchasing the cranes is approximately NIS 240 million.

The new cranes will be suitable for unloading container vessels up to 24000 TEU, with the ability to unload and load 2 containers 40 feet full at the same time, thanks to an advanced tandem system.

A unique feature of the cranes is the ability to control them even remotely through operators located in a control room that monitor the movement of the crane through cameras installed in the crane and displayed in real time on the control station screens.

Thanks to the newer systems in which the cranes are equipped, they are safer, contributing to a faster work pace.

The cranes are scheduled to arrive in January 2022 and towards this the western part of Grocery Wharf 21 will be upgraded, to absorb ships of 24,000 TEU by deepening the sinking and strengthening the wharf.

The contract with ZPMC was signed in recent days, after the results of the negotiations were approved by the company’s board of directors. The cranes will be delivered for operational work during the first half of 2022.

The board of directors of the port company has already approved an investment budget of NIS 2.4 billion for the development of the port in the coming years. This budget is allocated for investment in Platform 21, an amount of over NIS 1 billion.

The total budget, in addition to the 5 new cranes, is upgrading the platform at a cost of about NIS 600 million, and developing a semi-automatic terminal in the rear of platform 21.

The wharf will be able to moor mega-ships with a capacity of up to 24,000 containers – the largest ships of its kind in the world, and will also build a semi-automatic logistical rear.

Shiko Janna, CEO of the Ashdod Port Company, said: “The Port of Ashdod, the port of Israel, continues to promote modern technologies at all levels of the port’s activity in order to improve the service and become the most advanced port in the world.

“The first crane in Israel from ZPMC was purchased by the Ashdod Port Company, which already operates in the port. We have achieved impressive operational achievements during 2020, so we are confident that the addition of five higher and more efficient cranes will contribute to first-class performance and service to all our loyal customers.”