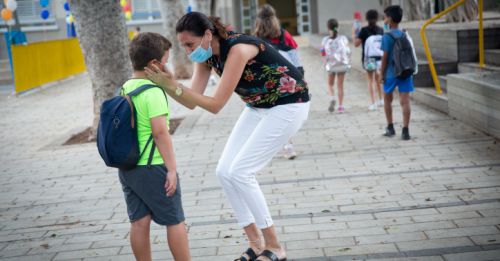 According to the new traffic light outline of the Ministry of Health, in addition to the color of the city – which is directly derived from the level of morbidity – the rate of vaccinators also plays a role in deciding whether to return to school.

After the educational institutions opened last Thursday in some of the green and yellow cities, Corona projector Nachman Ash said earlier today (Sunday) in an interview with Ynet that the traffic light will be updated twice a week – today and Wednesday – so some cities are expected to return to learning tomorrow.

According to the report on the Ynet website, there are a number of cities that did not return to school last Thursday, but following an improvement in morbidity, they are expected to open some of the educational institutions tomorrow.

These are the cities of Modi’in-Maccabim-Re’ut, Givat Shmuel, Kiryat Yam, Sakhnin, Ariel, Shefar’am, Maalot Tarshiha and Kiryat Bialik, which have turned yellow. If there is no last minute change these cities are expected to return to school tomorrow morning.

Gamzo: Anyone who thinks it is possible without the traffic light – does not understand Corona

As mentioned, according to the traffic light layout, even orange cities where there is a high percentage of vaccinated among those aged 50 and over, are expected to return to school. According to this section it appears that the cities as well Rehovot, Netanya, Nahariya, Dimona, Migdal Haemek, Eilat, Tamra, Yokneam Illit and Ma’ale Adumim will return to school tomorrow.

The report further states that In some of the neighborhoods in the big cities, it will also be possible to return to regular schooling in the kindergartens and lower classes on the basis of the same definition.

In Rishon Lezion, the Rishonim neighborhoods, Remez and Western Krayot have turned yellow, in Be’er Sheva – Ramot and Neighborhood V. In Petah Tikva, it will be possible to study – subject to the decision and the final map – in District 2 and District 7.