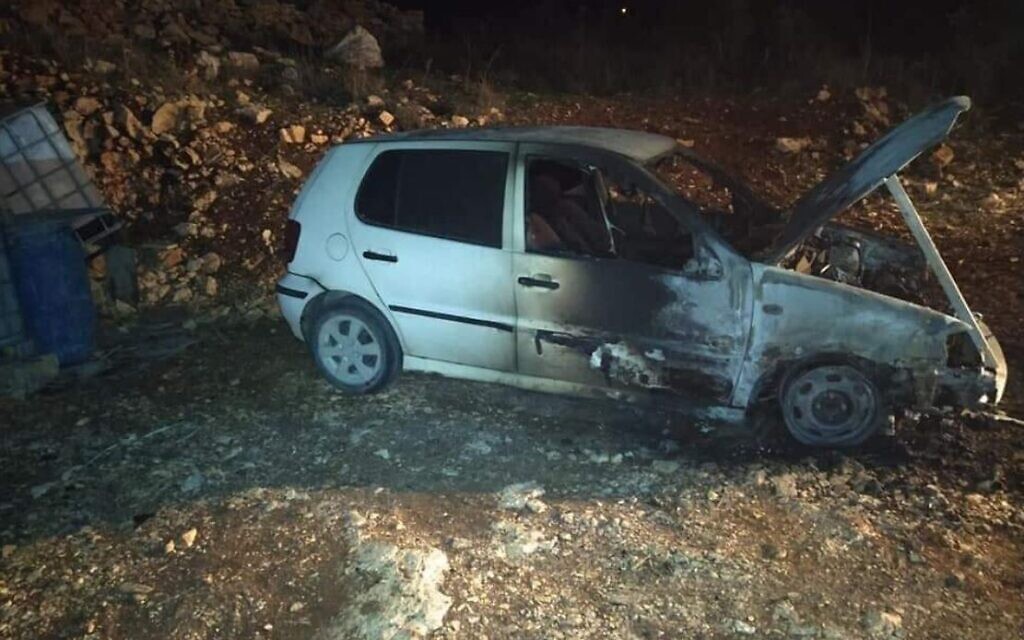 The Palestinian city near Jerusalem appears to have been vandalized overnight in a hate crime attack, Hebrew media reports said Friday.

Residents of Beit Iksa found two damaged vehicles and a Hebrew slogan engraved on a nearby wall, a spokesman for police said.

The graffiti on the wall read “fruit from Ahuvia,” with the Star of David next to it – a reference to a 16-year-old Ahuvia Sandak settler who died in December while chasing police after throwing rocks at Palestine.

Settlement violence against Palestinians has been on the rise in recent months following Sandak’s death.

Israeli Police said they have opened an investigation into the alleged hate crime.

The car in which Sandak was riding happened when he joined police after he and several others said he threw stones at Palestinians.

Ahuvia Sandak, who was killed when his car overturned when he was chased by police in the West Bank on December 21, 2020. (Permission)

Incidents of vandalism and attacks against Palestinians and Israeli security forces in the West Bank are commonly referred to as “price tag” attacks, with manufacturers claiming that they are attack for Palestinian violence or government policies that are seen as hostile to the settler movement.

Those involved in criminals have been very rare and rights groups lament that convictions are even more rare, with the majority of charges in such cases dropped.

Last Saturday, a group of about 10 abusive people, according to an Israeli settlers report, stabbed and threw rocks at a Palestinian family on the West Bank in an attack that the family captured on video.

In February, a 17-year-old Israeli settler was charged with attacks on Palestinian homes and buildings. The grenade defender threw a stun in two homes as families slept inside, police say.

Along with seven others involved, the defendant apparently dropped stones in four homes and vehicles, causing damage. As a result of the attack, one Palestinian man, 61, was injured in the face from broken glass, while his daughter, 17, suffered aggravated assault, cooling and upset.